Jurassic World: A Retelling of the Ending Fight

Claire's ankles ached with agony as she ran, guiding Rexy with the flare in her hand.  She reached the Spinosaurus skeleton just as her legs gave away, throwing the flare.  It hit the Indominus, who turned to see the original queen of the island burst through the skeleton.

It was Rexy, who stood where the skeleton's torso used to be, letting out her signature roar. 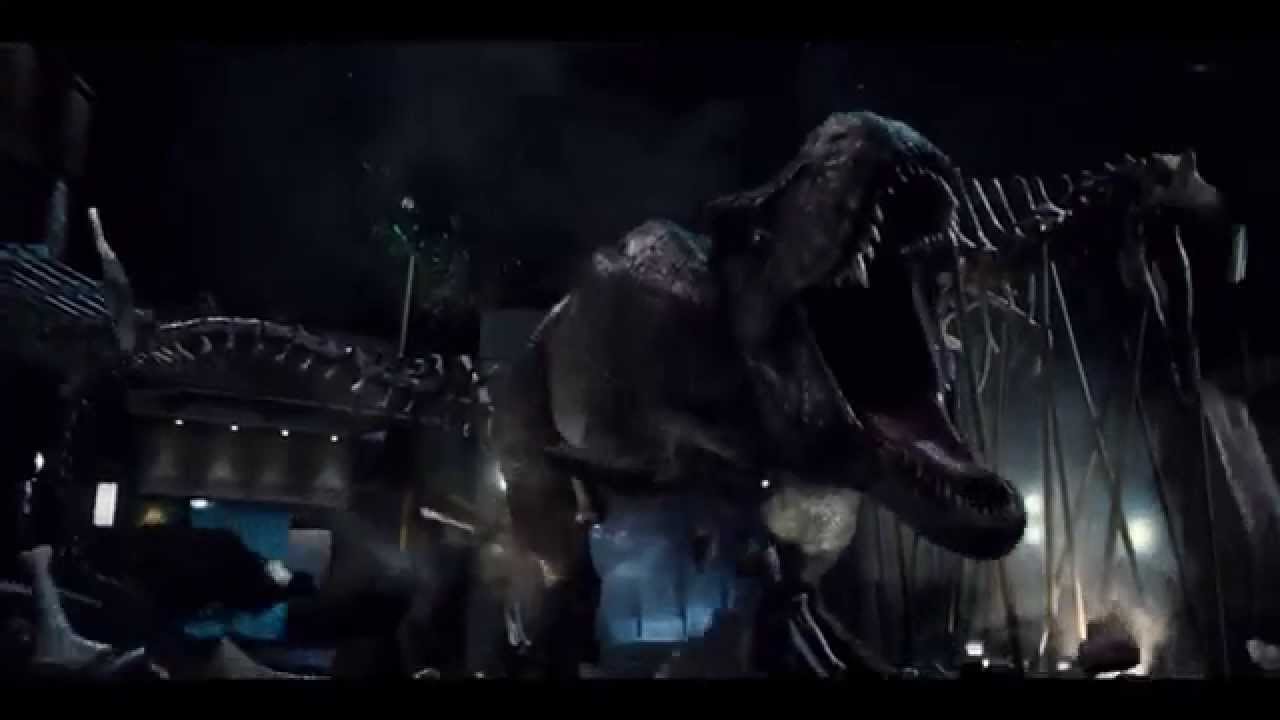 The Indominus roared in return, as Rexy walked over, facing her foe.  Again, the hybrid roared at her challenger as Owen looked on.

Claire lay behind Rexy's massive foot as the T-Rex roared, "Bring it!"  The I-Rex let out yet another roar, as Rexy charged.

She drew first blood, landing a direct hit on the Indominus's neck.  Claire watched as Rexy bit the hybrid again, her waving tail knocking over a sign.  The I-Rex, despite being locked in the older predator's jaws, managed to hit her opponent in the throat, giving her a new set of fresh scars.  Rexy clamped down on a piece of the hybrid's neck, shaking her head.  She ripped it off as the I-Rex's tail knocked over another sign.

As this happened, the Indominus thought, Am I really letting this old lady beat me?  I'm a fucking hybrid!

This seemed to give her strength, as she raised her arm in the air, slamming her claws into Rexy's side.  The T-Rex tried to bite her again, but was met by the claws of the I-Rex's other arm, who pushed her back.

The I-Rex grabbed Rexy's head, shoving her to the ground and chomping down on her neck as Claire crawled away.  The hybrid, still grabbing the tyrant in her jaws, slammed her into the Jurassic Traders Outpost, where Rexy saw Owen and the kids, trying to eat them.  They backed away as Owen spotted Claire.

"Run!" she shouted, as Owen felt the outpost's ceiling shake.

"Go!  Go!" he told Zach and Gray.  The trio exited the building just as Rexy collapsed on top of it, bellowing in pain.  The three met up with Claire, watching as the I-Rex walked toward the losing dinosaur.

Her vision blurry, Rexy lifted her head to see the I-Rex approaching, but her time was up.

Well, this is where it ends, she thought.  The hybrid reached down to kill her as they both heard a faint sound.

Despite not seeing one of them in 22 years, Rexy could tell that it was a Velociraptor.

The humans turned to see Blue charging toward the hybrid.  She roared, "For my pack!" as she stepped on Rexy, jumping on the Indominus.

Did that little bastard just STEP on me?!  Rexy thought.  But wait...why am I still on the ground?

Unleashing the full ferocity of her rage, the Tyrannosaurus Rex chomped down on the Indominus Rex's throat, slamming her into a building as Blue hopped on her back.  But the T-Rex wasn't done; she grabbed the I-Rex, swinging her around as Blue jumped on their common enemy again.

The humans ran, keeping up with the fight.  Blue fell in front of them, getting back up.  She ran around the two other theropods' feet as Rexy rammed her enemy, slamming her into another building.  She grabbed her, throwing her to the ground.  The I-Rex stood up, facing her as the Raptor jumped on her head, allowing Rexy to bite her as the hybrid threw Blue aside.  Using her last bit of strength, Rexy shoved the Indominus into the fence of the Mosasaurus Lake, breaking it.  The two foes faced each other as Blue stood by the T-Rex's side.  The three predators growled at each other as the Mosasaurus lunged out, grabbing the Indominus Rex.  The hybrid knew it was over, but kept struggling as the Mosasaurus drowned her, returning to the depths.

Rexy and Blue faced each other, grateful for the other's help.  The old Tyrannosaur limped away as Blue faced Owen, cocking her head, wondering what his next order would be.  Owen shook his head, as Blue ran off.

The next morning, Rexy stepped on the Isla Nublar helipad, surveying the destroyed park.