Jurassic Park 4 set on another planet?

CompsognathusMember0 XPAug-15-2012 7:44 PMWhat if Jurassic Park was set in the future, as InGen decided to do their research not on Earth, but on another planet, they have secretly found a planet that has a forest ecosystem, and they decide to send their dinos to the planet, as a means of being separated from human existance. So one crew looses power to one of the engines, as they crashland to the planet InGen has been breeding, and they have no choice but to wait. They set up camp, but things go horribly wrong. I dunno, I was inspired by Prometheus. lol. It's a cheesy concept.
16 Responses to Jurassic Park 4 set on another planet? 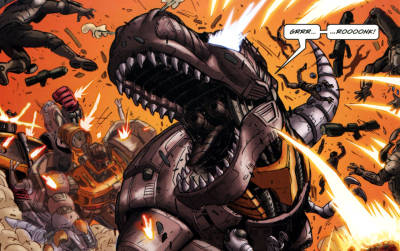 CompsognathusMember0 XPAug-15-2012 9:05 PMSounds like Dino Crisis 3 :/ I love space. I love dinosaurs. I love Space-Dinosaurs. I don' want me no space Jurassic Park. Save that frontier for a different series.

CompsognathusMember0 XPAug-15-2012 9:26 PMI seriously might write a screenplay for that. That is an amazing idea for a movie. They could do a new series of Jurassic Park movies off of that.

CompsognathusMember0 XPAug-15-2012 11:30 PMHey there visor97, whoa, you think it's a cool idea? Yay, I ha this idea in the back of my head for a long time, but i thought it wouldn't work. Lol. Hey we should team up and both pitch in ideas. How about InGen abandons the planet du to being something bad happened. A small group of space travellers loose contact from their home colony Earth, and as they travel through a rough asteroid field they burn an engine, causing them to crashland on te InGen planet. There they have to survive. Since it's the distant future, how about one of the guys in a giant mobile suit fights a T.Rex, and the T.Rex wins. Not bad eh?

CompsognathusMember0 XPAug-16-2012 12:05 AMNot bad at all. I like that. This kinda reminds me of the movie Alien/Aliens. I love both of those movies. I think this could totally work, and yes we should team up that would be awesome :D

CompsognathusMember0 XPAug-16-2012 1:07 PMThis could work in a sort of way, it could be an expedition to a new world, a small crew, and they loose contact with Earth, and they have to fend for themselves. Or, Earth's being destroyed by massive earthquakes that are causing the plate tectonics to move rapidly, cities are being destroyed, as people have to escape to different planets, individuals escape in pods. One person escapes, and lands in a jungle planet, little that he knows is that he is not alone. And that he meets other people who landed on the same planet, they each team up in trying to send a beacon to other worlds, as they discover they weren't the first people on this planet, but InGen! OMG!

SpinosaurusAdmin19646 XPAug-20-2012 3:19 AMLuigi, I must say your idea has sparked many a people's attentions. Haha The internet surrounding JP4 has your theory as an "official plot rumor" right now. I mentioned this on our Facebook page, which is probably how it got spread so quickly, but wow - never thought people would take it as official news. Well done Luigi! Quite the imagination you have! If JP4 was to be done in space, it'd be very difficult to write and not have it be cheesy as hell. I expect JP4 to take place in a modern setting, not on an island or tropical planet. But I like your crack at the idea. Keep the ideas coming!

CompsognathusMember0 XPAug-22-2012 5:49 AMYeah, it's a good idea, mainly because it would be about both space and dinosaurs!
Have you heard of phoenix asteroids? They glow in every color of the rainbow...they travel endlessly through space... CompsognathusMember0 XPSep-04-2012 1:23 PMThe whole planet aspect is really cool. But it wouldn't fit, it just doesn't click. When it comes to space I always think of the Alien films, which I also am in love with. So that's what people would think, Jurassic Park in space all in all is exactly like Aliens, except with Dinos instead of xenos and jungles instead of dark creepy corridors. But ya never know with Hollywood and technology these days

We aint outta here in ten minutes, we wont need no rocket to fly through space.

CompsognathusMember0 XPSep-25-2012 4:29 AMThough it is an interesting idea I feel that it just wouldn't fit in the JP universe. The islands have been sort of a symbol that have reoccurred throughout the series. Though in JP 3 the island was very much so abandoned, and unkempt, I wouldn't exactly know where to place the setting. The dinosaurs have also been brought to the city as well, so I'm not sure if that idea will be revisited.

CompsognathusMember0 XPSep-25-2012 6:12 AMIt sounds like basically Avatar butwith Dinosaurs haha but hey a movie is a movie I just reallyhope this movie comes out s badass as it is hyped up to be

Tyrannosaurus RexMember6270 XPApr-04-2013 8:25 PMI like the idea. The thing is though, it should be used for a different series. Jurassic park in space would be cool, but, it just wouldn't be the same.

CompsognathusMember0 XPApr-05-2013 1:33 AMnow how the heck are you going to get a BLOODY DINOSAUR into space off isla nublar i love space/dinosaurs (i used to love the captain raptor comics when i was younger) [img]http://users.manchester.edu/student/crestepp/340LitTech/Captain%20Raptor%201.jpg[/img] but think for a minute you cant go to far-into the future or else it dosent make sense you cant go too far back or else whats the point dinosaurs cant go to space it would be fine for a different series but not the jp series sorry if i sound just a bit skeptical but it dosent make LOGICAL sense