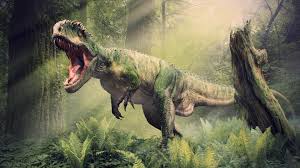 Should the Giganotosaurus be the main Villian in Jurrasic World 3?

We all know the T Rex has fought the Raptors, Spinosaurus (non cannon), the Indominus Rex and the Carnotaurus.

But who should he/she fight next? The Giganotosaurus seems to be the best option to me because the T Rex has fought 3 large carnivores. The Giga would be introduced into the Franchise during the trailer most likely.

while many people have been upset that the Veloicraptors weren't going to be released into New York City.

Which means there will be no help for Old Rexy this time, but in the end the T Rex should come out on top. Well if thats the way the directors would go.

the Giga could also be the main Antagonist in the 3rd movie.

Sorta like the Indominus Rex in the very first movie.

The T Rex could be unleashed to help the Crew take the Giga down.

The Fight could also take place in the middle of New York City.

But do you think the Giganotosaurus should be the main Villain in Jurrasic World 3?

9 Responses to Should the Giganotosaurus be the main Villian in Jurrasic World 3?

I'd like that, but I'm not sure if that's possible because Giganotosaurus wasn't one of the Dinosaurs saved. Then again, Dr. Wu stole a lot of DNA samples at the end of the first one, perhaps one of them was the Giganotosaurus DNA they used for the Indominus? It'd be pretty cool, and it's POSSIBLE, but I'm not sure if it would be PROBABLE. I think the Allosaurus pack or Carnotaurus pack should be the main villains, since we didn't see them enough in the last movie and still have a lot to learn about their characters. It'd also be a good way to implement the camouflage they had in the second novel. Maybe there are no Dinosaurs in the film. Maybe they were all killed and the third movie is just the psychological problems Owen, Claire, and Maisy face from all the ridicule from releasing the Dinosaurs onto the world XD

or they may make a new hybrid

Alternatively #1, they don't need to introduce a new large carnivore for Tyrannosaurus to fight. I mean Buck and Doe didn't fight off any rival theropods.

Alternatively #2, Rexy/Roberta fights off a new and improved Tyrannosaurus clone. Not a hybrid but a new batch of Tyrannosaurus since Rexy-Roberta is an outdated specimen and it would hearken back to the Book. It could also allow the introduction of feathered dinosaurs.

What about fighting spinosaurus again?

The spinosaurus has already been done. I'm more in favor of a T. Rex on T. Rex fight.

I'm most in favor of Rexy fighting a pack of Allos, since they have a captured allo and one in the wild.

I don't think an Allosaurus would want to mess with a Tyrannosaurus since they kind of belong to different ecological niches. Bringing in a newly improved tyrannosaurus with an upgraded genome would revive the more science fiction element to the Jurassic Park series and would be a neat little reverse nod to the book. Because Wu wanted dumb down dinosaurs but here instead we get pure(or at least purer than InGen's Dinosaurs) dinosaurs competing with Wu/InGen/Masarani's Dinosaurs

That would be really cool, that's a great idea! I wish that they'd do something like that!