Mosasaurus vs. the Meg

A battle between this summer's two prehistoric marine beasts: 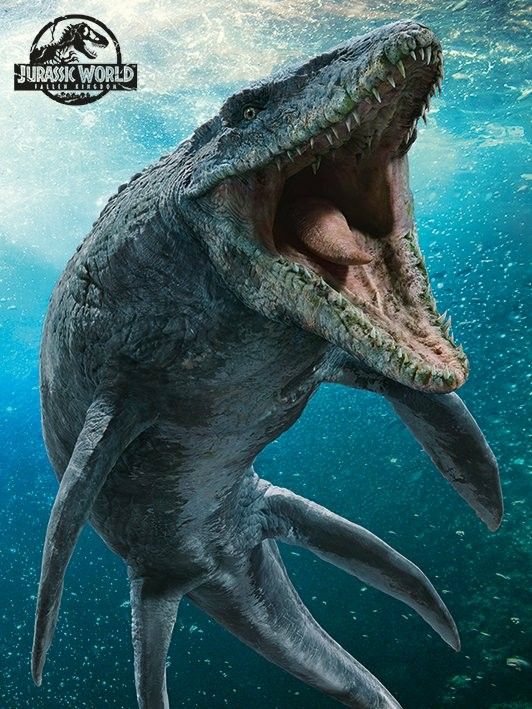 The Mosasaurus lurked deep beneath the surface of the Pacific Ocean. In the past three years since her freedom from her tank on Isla Nublar, she had complete freedom to traverse throughout the oceans, leading her to the western Pacific. She had her prey in her sight. Just hundreds of feet away was a pod of humpback whales. She slowly swam towards them, gradually closing the gap between them. As the gap was closed to 150 feet, she picked her target: a particularly large female. She darted forward, opening her massive jaws to grab her prey.

Her snout rammed into something rising from the depths in front of her. She turned back a bit, getting a better look at the object. Swimming in front of her was the largest shark she had ever seen. She had been fed countless sharks during her time in Jurassic World, and had encountered some in the wild, but she had never seen one as large as the one in front of her. It was nearly as long as her. And it was feasting on her prey.

The Meg swallowed the remains of the humpback whale as it felt something ram into its side, forcing it back. She gasped for oxygen, unable to breathe if she didn’t move. She moved her tail from side to side, slowly picking up speed. Suddenly, something grabbed her tail. She moved her tail with more force, soon freeing herself. She turned, getting a better view of her attacker. It was a long, thin creature with a four flippers and a crocodilian skull. She had never seen anything like it. She turned again, snapping her jaws at the Mosasaurus, who dove under her.

The Mosasaurus swam deeper underwater before turning around and swimming at full speed towards the Meg. She rammed into its underside, striking her near her pelvic fins. The Meg, slightly stunned, tried to swim off as the Mosasaurus bit into her. She thrashed around, soon freeing herself from the reptile’s grasp. The shark quickly dove and turned, snapping at her attacker. Before she could land a blow, the Mosasaurus escaped. The Meg followed her, determined to eliminate the threat.

The Mosasaurus knew she was being pursued. She sharply turned to the right and dove down, attempting to strike from under again. The shark followed her. As the two dove deeper, the Mosasaurus lost sight of the Meg. After half a minute of searching, she felt a burning pain in her right side. The Meg had struck her. She attempted to swim off, but the Meg snapped her jaws again, instantly tearing a chunk out of one of the reptile’s rear flippers.  The Meg struck one more time, grazing her opponent’s tail. The Mosasaurus swam away, but to no avail. The Meg instantly smelled the blood in the water and began to close in on her prey.

The shark quickly approached the Mosasaurus. She lunged forward and opened her jaws, but closed them on nothing. She looked around, seeing the Mosasaurus swimming towards the surface. The Meg darted after her. The Mosasaurus turned in an arc, descending again. As the Meg turned to face her, the Mosasaurus swam towards her and rammed into her gill slits. The shark, instantly stunned by the blow, was helpless as the Mosasaurus her pectoral fin, tearing through it. She quickly moved on to the shark’s neck, repeatedly closing her jaws on it. However, the Meg quickly escaped the mosasaur’s loose grip on its wide neck.

The Meg turned and snapped her jaws a few feet away from her opponent’s face. The Mosasaurus lunged forward and slammed her jaws shut, taking out a pelvic fin. The Meg thrashed her tail back and forth, quickly propelling herself forward as she closed her jaws on the mosasaur’s side. The two predators continued to go back and forth, snapping jaws and grazing skin, until the Mosasaurus shot forward. She attempted to dive under and stun the Meg, but it knew where she was.  It followed her down until the Mosasaurus swam for the surface again. She needed air.

The Meg found her chance to kill her opponent. As the Mosasaurus was at the surface, she darted up to her. Its jaws thrust forward as it rapidly approached her prey. Suddenly, her vision was hit with a blinding light and she lost track of the Mosasaurus. Living in the bottom of the ocean for most of her life, she wasn’t as used to the sunlight. She quickly swam around, looking for the mosasaur’s light underside. She turned around and saw the creature descending. The two predators faced each other, each wounded and exhausted. Finally, the Meg swam off. She was in no mood to continue the lethal battle. The Mosasaurus watched her leave and soon turned around. The Pacific Ocean was big enough for both of them.

I couldn't decide who would win. In the end, I decided both predators had their own pros and cons and were nearly equally matched. It would ultimately depend on the situation and location for one to be victorious.

3 Responses to Mosasaurus vs. the Meg

As much as I prefer FK to The Meg, I think Megalodon would win because it had the greatest bite force of all time.

^If it landed a good blow to the head or neck it probably could’ve, put I’d say the Mosasaurus was more agile and possibly faster. Plus it has the benefit of genetic modifications.

That was pretty good. I like that it ended in a tie.