What is your custom hybrid?

The Indominus rex in Jurassic World is the first hybrid in the series.  If you could make your own hybrid, what would it be?  Here's mine:

9 Responses to What is your custom hybrid?

Jurassic Park III's Spinosaurus was already a hybrid with Tyrannosaurus. If you look at it closley it had T. rex teeth and T. rex's eye brow crest rather than the prehistoric Spinosaur's single between the eyes crest.

But talking about Hybrids I would love to the Ultimasaurus from the Chaos effect toyline.

However for my own custom hybrid, it would be a Dilophosaurus + Velociraptor + Stegosaurus + Tyrannosaurus hybrid. I shall call it Dilophotyrannus antirrhopus (Counter balanced Two Ridged Tyrant)

@Xenotaris, why did you think that the JP3 Spinosaurus had T.rex DNA in her?  There's no proof of that.  The skull of that Spinosaurus is based more off of Suchomimus, because a complete Spinosaurus skull was not found yet at the time of making the animatronic and CGI version of that dinosaur.  The most feasible way of constructing the Spinosaurus (which isn't saying much) was making extrapolations from what was known about Suchomimus and Baryonyx, with a bit of artistic license.  Later on, I think in 2005, the upper part of a Spinosaurus skull was found, and that's how we learned that there was only 1 crest and not 2.

@JPSpinoRex65, I like the Ultimasaurus hybrid a lot.  It was the anatomy combinations of many dangerous dinosaurs, and because of the instability of its DNA being a combination of different creatures, it would have a natural behaviour instability as well, resulting in extreme aggression, probably worse than the I.rex.  Essentially, its a war animal who's impact wouldn't be fathomable, and that's what so dangerous about it.

Xenotaris: the Spino's ridges are in front of its eyes, while the rex's are over its eyes. The Spino also has smaller ridges, so...no.

I didn't know they based it on a Suchomimus but Suchomimus would still have fish eater teeth, right?

But what did yall think of my Hybrid?

@Xenotaris, your hybrid is a mish-mash of species that would result in an unstable creature capable of much destruction and murder...nice job :P  As well, yes, Suchomimus did have teeth designed primarily for catching fish.  That Spinosaurus did have similar teeth, but the Spinosaurus was meant to be even worse than a T.rex because of Jack Horner's influence and his unorthodox theory at the time that T.rex was an pbligate scavenger as an adult.  I also think that the Spinosaurus in the movie had bigger teeth than it should have had, but don't quote me on it.

@JPSpinoRex65, yeah it is, but I can't think of any other hybrids at the time.  It would require a lot of thinking, and I can't come up with these creations on the spot.  I evaluate the idea a lot before I finally decide on it.

I used to own a Compstegnathus toy 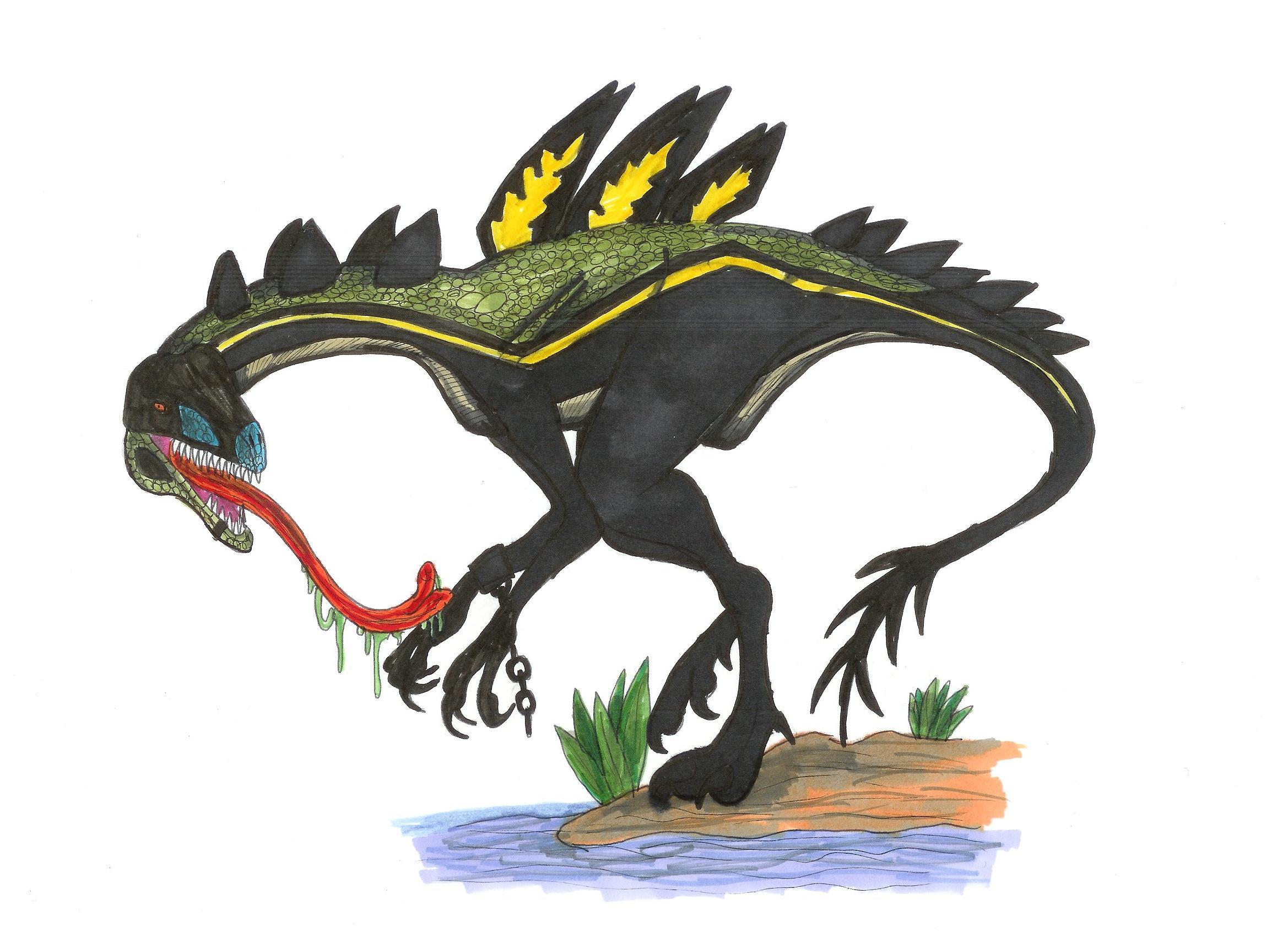 And then Titanoraptor, which is like a 30-foot Utahraptor. It is highly intelligent, hunts in packs of 3, and can bite about as hard as an american alligator. The body is covered in feathers, making juveniles virtually identical to baby tyrannosauruses. They have a deep hatred for Carnotaurus, Ceratosaurus, Tyrannosaurs (especially Tyrannosaurus), Stegosaurus, Spinosaurus and fanboys.

Appearance: Has a long tail, horns above the eyes, Carnotaurus aromor, a large, hooked claw on each hand, a sickle-shaped toe claw on each foot, a somewhat long snout, long arms, and Indominus-like feathers on the arms, neck, and parts of the tail.

Abilities: Camouflage, can wrap its long tail around things, venom (able to spit it)