Life was grand. Cobalt couldn’t remember the last time he had been so full, so unchallenged, and so overall happy-and with good reason, too. He had recently killed a stegosaurus all by himself, in under thirty seconds, by rushing from the front and squashing its ridiculously miniscule head with his jaws. As he lay down next to the half-eaten stegosaurus carcass and began to drift off to sleep, he sensed a disturbance in the air. He lashed his foot out into the chest of a ceratosaurus a second before its jaws clamped down on his neck. It staggered back, regained its footing and bit the stegosaurus.

Cobalt growled. Filthy rat. It obviously wanted a fight- if it wanted the meal it would have at least tried to intimidate him without a fight. A fight he wanted? A fight he would get. He charged the ceratosaurus as it was still bent over and rammed it on its side, but is flailing limbs kept him from delivering the final blow. As soon as it was up, he charged again. This time it was prepared and lashed out with a claw, nearly taking out Cobalt’s eye. Reflexively, Cobalt hacked down and bit off the cerato’s arm. Reeling from the shock, the ceratosaurus had no time to react as Cobalt grabbed his throat and started biting. The ceratosaurus assessed this as a lose-lose situation and took a big risk.

He charged straight toward a tree.

The speed of the cerato was too much. Burdened with the lurching momentum of his competitor, Cobalt lost his deathlock on the cerato’s throat and stumbled.

Victory flashed in the cerato’s eyes as he lifted up his leg to stomp the allosaurus into oblivion.

Desperate, and with nothing to lose, Cobalt lunged upward and bit down right between the ceratosaurus’ legs.

Which is a very mean thing to do, even for a dinosaur. (Don’t try this at home.)

It also hurts a lot in that particular area, even for a dinosaur.

In fact, it hurt so much for this particular male dinosaur that he stumbled sideways into a hidden clearing Cobalt had never even realized was there.

In the far corner of the glade lay a female ceratosaurus, thin and starved. She was huddled around some hatching eggs, though from her fearful expression Cobalt could tell she had no hope of protecting them.

Cobalt held her gaze for a moment, then turned around, leaving his prize meal to the smaller carnivores.

Hours passed as Cobalt’s stomach tried to convince him to take back the meal, but Cobalt resisted. He remembered the expression of pure gratefulness, mixed with a little fear and some are-you-sureness on the ceratosaurus’ face; it would be torture to reclaim the stegosaurus.

Cobalt could hardly swallow faster than he could drool. A whole herd of stegosauruses! When he saw them, hunger completely took over. He set his eyes on a stegosaurus that was tough and scarred leading the herd. He roared dreadfully and charged, throwing caution to the wind. The bull stego he was rushing whipped around and drove its deadly thagomizer into Cobalt’s shoulder.

Several days passed until Cobalt briefly awoke to his puncture wounds stinging like fire. Too numb to do anything, he quickly drifted back into dreamland.

Weeks had passed since Cobalt had woken up to find Flintstone tending to his lacerations with pine-needle juice and stuffing him full of sauropod steak. At first his wounds had felt even worse, but now they had healed to barely a scar. Cobalt looked at his mate, and she at him. Perhaps this was the beginning of a successful relationship.

The fight ended with no death, but if they had continued the ceratosaurus would have fallen over, paralyzed by pain, and Cobalt would have finished him off.

But at least cerato survived... 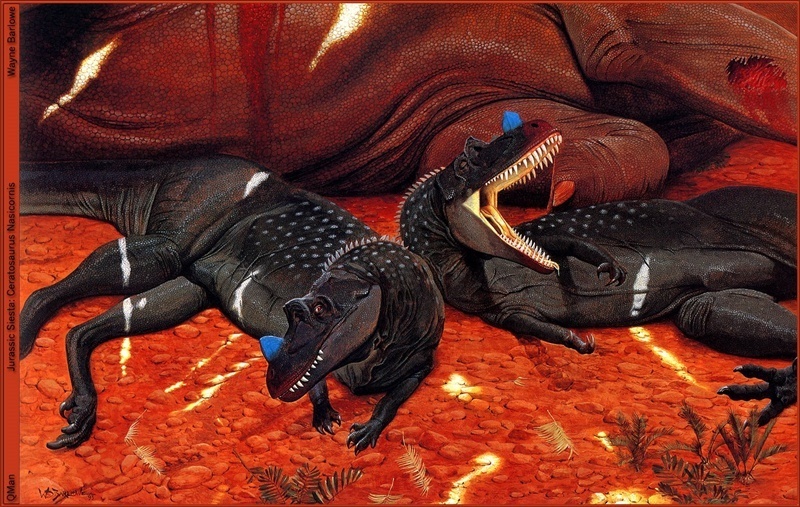 PS Silver Falcon I used your suggestion because you said “you could instead say "The male looked at his mate, and he at her. Perhaps this was the beginning of a successful relationship."” To me that means I’m allowed to use it, but if that’s not the case I’ll gladly replace it.

4 Responses to Ceratosaurus vs Allosaurus

Yay the Ceratosaurus didn't die to Allosaurus like it always does

Ah Ceratosaurus the Dr. Zoidberg and Kenny of the Dinosaur World