Watching several JW trailers and TV spots, one thing that's really stuck out to me is the rifle used by Chris Pratt's character, Owen Grady. Keep in mind, I am a gun nut, so I am drawn to firearms. I thought the rifle was familiar, so I took a quick look on google images. The rifle is most likely a Marlin 1895 Guide Gun. The stock is laminate and the action is stainless steel. It's a lever action rifle with a stainless steel scope (most likely 2-7x32 or 3-9x32). 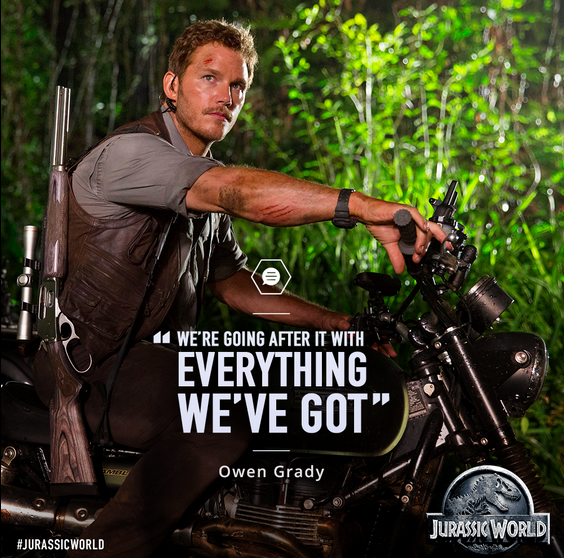 What's most interesting about the JW crew's choice in firearm for the main character is not that the gun is the over the top, super badass, high capacity automatic that most movies seem to lean towards these days. What makes it stick out is quite the opposite. It's a rather modest rifle. The rifle itself is worth maybe $800, and the scope another $100 to $200 (depending on manufacturer). The gun is a five round (4 in the tubular magazine, and one in the chamber), that is most likely chambered in .45/70 Government (it can drop a bison at 800 yards, it's powerful).

Any thoughts on the rifle? Does anyone think they should have chosen a different rifle for Owen, or do you think the Marlin is a great choice?

Well as you know I don't know too much about guns but it seems to be a very cool choice!

I think it looks pretty cool myself. I like that it's a modest rifle. I think it suits Owen and the entire film in general well. I wonder if Owen if intended the rifle to be a safety precaution against the Raptor Squad or the wild dinosaurs that roam the restricted zone.

LORD VADER - I happen to greatly enjoy the fact that Owen's rifle is a "simple" firearm! It lends a certain amount of credibility and ruggedness to the character - almost evoking the sense of an African bush guide! If I may ask, what caliber is this weapon? Its barrel suggests - from what I can see - a fairly large bore. Regardless, thank you for presenting this very fun topic! :)

@ Something Real, the caliber is .45 (almost half an inch in diameter). The name 45/70 refers to the caliber of the round and the grains of black powder (70) used to propel the round.

At first I was a bit puzzled by this choice of firearm in such an environment asking myself the obvious questions like "Why not a magazine fed auto? Why not something stronger like a .50 BMG? and Why not a full automatic?" It later occurred to me that this is a very sensible weapon for this environment. For starters, the Marlin is a very sturdy gun and can handle some very hot loads, loads that can be used on Africa's big 5. The rifle is relatively lightweight and is not so large as to make portability a task. Just sling it over your shoulder and go.

To answer my own initial questions; Magazine fed autos can jam up and are generally not as reliable as bolt/lever action guns. Stronger guns like the .50 BMG tend to be quite large and a great deal heavier, making it a chore to carry it around all day. The same can be said of full automatics powerful enough to do the job.

I don't see this weapon for restricted zone duty (an armed team of people would make much more sense). Instead I picture this rifle being carried as a safety precaution for the raptors and general purposes.

SPINOFAN - Thank you ever so much for the information! I will certainly put it to use! :)

Just figured I'd throw it out there in case anybody else was curious. Grady's rifle is a Marlin Model 1895 SBL (Stainless, Black Laminate). As said earlier it is chambered in .45-70, and a capacity of 6 rounds. I'm not sure on the scope (never have been good at ID'ing them). The only thing I was surprised about was that they had the scope mounted all the way to the back or the Weaver rail. I'd probably mount it a little closer to the front of the rail for a little faster target acquisition on the pull up.

Well, I said 1895 Guide Gun, so I got the number right, just not the right variant. Not bad I'd say.

The scope looks to be a 2-7x32 or 3-9x32. Not sure what manufacturer or what model, but that's the magnification I believe it is.

It all depends on the shooter. Some people find it better with the scope further ahead, others with it further back.

As someone who plays battlefield, my first thought was honestly; "He's got a Mare's Leg!"

(I did believe myself to be incorrect however)

I believe the scope's a Leupold FX-II Scout IER 2.5x28mm.  About $300 from online retailers, plus another $50-60 for quality quick detach rings.

From what I've seen on other sites, I am inclined to agree that the scope is a Leupold FX II Scout. Not sure about the type of rings, I personally wouldn't use quick detatch rings, but this film wasn't made around my preferences. Additionally the sling is a Butler Creek Ultra Cartridge Sling.

The rifle he has is a Marlin 1895 guide gun with a Leupold scout scope mounted with see through rings. The gun is probably chambered in 45/70 although 444 marlin wouldnt be bad, either choice would have very noticable recoil but not when fired in this movie. I did notice the jacketed ammo on the sling, that wouldnt be my first choice for thick skinned game such as dinosaurs. Id prefer 500 gr solids. In the end of the movie he used the gun multiple times at close range but never manipulated the lever. I cant get any of my lever actions to do that, I guess he has the "semi-auto" version of the lever action. He also had some well placed shots with zero damage to the dinosaur, I guess the jacketed ammo broke up on impact.....