Haven't seen an Actual list of this yet. So... Yeah.

While scrolling through the great and Wonderful world of Twiiter, I found this Gem.

From a Great Contirubuter to the JW/JP Community, Chris P.  (Not Chris pratt.) 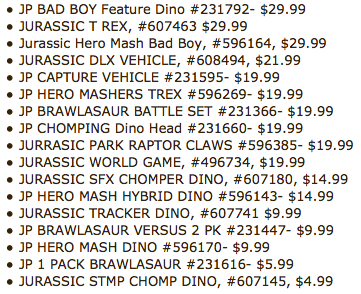 I trust his Knowledge as Legit, As he's Provided a Lot of News on the Franchise and such.

Those are the Advised Prices, They may Go down, or go up by the time they Hit Shelves.

I've got some really JUICY Stuff.

A Schedule of the DVD Release and Merchandising and Such.

Note: This was in a Prior discussion, But I don't believe a Picture was Provided.

We are getting a Lego JW Game.

Knowing the Lego Company, They are going to Bundle all Four movies into one Game. *An Example being their Pirates of the Carribean game.* So, Even If you've Outgrown your Fondness of Lego, The Game may or May not be worth your time.

We are also getting JW Lego. *With some JP Sets.*

Now, To the First Picture.

JP Bad boy, is Believed to Possibly be D-rex. But it's not Confirmed. (Your going to have to wait on some of these.)

Jurassic T Rex... Well, A rex... Most Likely Identical or Close to the Ones Released from TLW Or the 2009 JP Wave.

Jurassic Hero Mash Bad boy, Logic Tells me that this is a Toy that is D-rex but you can take it apart and Add different DInosaur parts to it, Kind like a Customizing Toy. These have become Extreme Popular with Kiddies for some reason (I remember having this Weird Toy I always got from McDonalds, That was made out of Squares, But you could mix and Match it.)

Jurassic DLX Vehicle - Well... I've got No Idea. Most Likely the 6X6 Truck we've been Seeing, Or, The Old JP Tour Vehicles... Anything....

JP HERO MASHERS T-REX- Err, I've got two Ideas for this one. Chris P., Stated it has a Chance of Being an Electronic Rex with sounds. My Idea is it's a Mix and match to go with the D-rex

JP Brawlasaur(s) - I think they're just Smaller Versions of all of the Dinosaurs in the film. Just... Smaller...

The rest seem kind of Obvious or I'll let you guess.

this freaking awsome thanks for the find. that jurassic world game mentioned is most likely a board game of some kind. the price is too low to a video game even a game for 3ds. bad boy is more than likely the d-rex. also wasnt the d-rex stated to be female? i remember the director saying this during his early statements on the leaks

Why are some called heroes? does that mean they represent the tamed dinos?

Ok DB, the capture veichle sounds suspicious, is there gona be a flash back to when they captured the dinos like in the poster? i wonder...

I am optimistic about this latest leak, if cautiously so. It seems that they may be going for a mutlimedia approach with Jurassic World. Time will tell if that is the best approach to try. Seems likely that they will do something for the Super Bowl ...probably a teaser or trailer of some sort.

Toy's R Us stated that this is Universals Biggest Approach at anything they've ever done. Their Marketing and Merchandising the hell out of the film.

They are doing something for the Super bowl.

My understanding is, That, It's going to be something like the Recent Transformers, Who, Aired a 45 Second long Commercial during the Super Bowl last year.

I've got an Idea, That Universal is trying to beat Star wars in All Time sales.

Thats how much they're throwing at this...

I can imagine, really with the marketing push. Both Avengers 2 and Star Wars, movies that will have HUGE amounts of marketing pushes for them I figure. I think that they realize accurately that they need to do equal amounts of cross-platform marketing to even approach where they are at in terms of media saturation, which is a good idea. After all, this is a franchise that is still remembered in the pop culture despite not having a movie in 10 years you can still see how much it is ingrained in the culture to the point where you can easily find the shirts of the logo relatively quickly in Target. I know that the Lost World had a spot like that...which is really intriguing. I also imagine that if Chris Pratt does the Kids choice awards, some sort of tv spot might show.

But the toys! Thanks! Planning on buying all the JW toys

But the toys! Thanks! Planning on buying all the JW toys

Do you think they will be doing any of the things like the toys R us marketing in Britain, because I live in Britain.

Yes, I believe the UK Should be Receiving Merchandise aswell.

I can't confirm a time though

Thanks for sharing this Paden! I know what I'm gonna buy in a few months...

(However, I'm not too exied about a JP LEGO game. LEGO screws up with movie-based games.)

I am excited about the Lego game! I believe LEGO games garner a larger audience then regular video games...something about appealing more to the casual audience, plus LEGO games allow someone to playthrough an adventure with their friends! So that you could playthrough JP,TLW,JP3 and JW with a buddy or two.