Hello There. I've always been interested in taking a closer look at the massive carnosaur known as Giganotosaurus. From what I understand, this creature was a giant - capable of taking down massive saurupod prey with its impressive killing jaws. However, I've always wondered how this animal would compare to the Tyranosaurus. According to most, the Giganotosaurus was noticeably larger and more powerful then the T-Rex. However, I've come to the conclusion that getting information from multiple sources is the best way to go when dealing with a topic such as this. With that as the case, I've decided to ask each you your own opinion concerning this topic. As always, your thoughts and conjecture concerning this topic are most appreciated, even if you keep them to yourself. :) 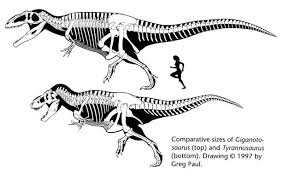 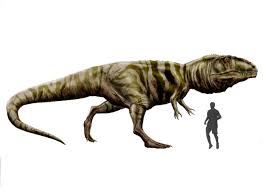 12 Responses to Looking at Giganotosaurus

In terms of length, I believe the Giganotosaurus had an advantage. In terms of speed as well, but when it comes to pure mass, I think that the T.rex outweighed him by about 1-2 tons. And when we look at weaponry, the T.rex is the obvious winner, with binocular eye sight, the smartest brain out of any theropod to exceed 2 tons and a bite force that could crush steel. If you were to look at both from the side, yes Giganotosaurus appears to be the larger, more menacing animal, reaching lengths of around 45 feet long and being slightly taller than Tyrannosaurus.

However, a study on both predators, and looking at their skeletons, it would be most likely that Rex was indeed the heavier animal. True, Giganotosaurus took on Sauropods (in large packs that not all members survived to see the kill), and Tyrannosaurus hunted Hadrodosaurs and Ceratopsians. Giganotosaurus would be more lightweight than Tyrannosaurus because it needed to be quicker and more agile. Why? It's simple. When 100 tons of angry sauropod comes crashing down on you, it doesn't matter if you're 7 or 70 tons, you're f*cked. A lighter animal would be able to avoid the sauropod better than a heavier animal, so Giganotosaurus needed to be lighter.

In combat, Giganotosaurus seems like the obvious winner. It was longer, taller, and had useful arms. Tyrannosaurus had the highest bite force of animal at almost 6 000 to 18 000 PSI, it had binocular vision, and it was built like a tank. Tyrannosaurus would have been an extremely tough, powerful animal, while Giganotosaurus would have been tough as well, but not as tough, or powerful.

In the end I believe tyrannosaurus would be victorious. As stated above by very knowledgeable people, giganotosaurus did have a slight length and height advantage but tyrannosaurus was heavier and more intelligent than the earlier rival. Giganosaurus was a more primitive animal overall and I'm sure many would agree with me in saying that tyrannosaurus was an advanced and perfectly designed killing machine, a triumph of evolution. I believe evolution would not produce a creature that could be killed and dominated by an already tried and failed, now I say failed because giganotosaurus became extinct and not by some cataclysmic event, anyway, tyrannosaurus came later in the day and possesed newer weapons, a bigger brain and was bulkier aswell. I think all of this does not spell a good ending for giganotosaurus. That's just my opinion SOMETHING REAL, hope it helped!

Something Real-Certainly Giganotosaurus was a formidable carnivore.  Those jaws were made to cause A LOT of damage, and it did have length and height advantages over Tyrannosaurus.  It was also relatively heavy and had more reach with it's skull, so it would have been quite capable to scaring and killing a Tyrannosaurus (or at least cause it to back down).

But Tyrannosaurus was the heavier animal, and was much stockier.  It would not have been easy to knock it over, and probably could absorb body-checks much better than Giganotosaurus.  And should I mention it's intelligence, binocular vision, and it's bite?  Those things go without saying, since Giganotosaurus could not compare in those areas.

Howvever, if they fought, neither one of them would walk away from the fight without being seriously injured.  If they really wanted to fight to the death, they had the tools to kill each other.  The fight could go either way, and no matter who you're rooting for, it would have been one of the most terrifying and spectacular sites the world would have seen.

Of course, you already know my opinion with The Tyrant's Roar, but the roles are so specific that it isn't a fair prediction if the two genera ever met.

Giga is comparable to, if not longer, than T.rex in length and probably height. However, T.rex is far bulkier and heavily muscled. Giga is not heavier, in fact, T.rex was probably heavier.

Giga had teeth perfect for slashing flesh, but T.rex had the bone crushers. T.rex was also stronger(pound for pound at least). While Giga was probably faster and more agile than T.rex, T.rex was smarter and had better senses. Each of you has provided quite a bit of excellent information! I thank each of you sincerely for the contribution! This will certainly help me to a great extent. You're each exceptionally awesome! Once again, thank you so very much! :)

everything i've gathered on Giganotosaurus points to it being an overall more gracile animal, though it was no lightweight. Those slicing teeth in a skull almost six feet long almost certainly did a great deal of damage, but i'd like to point this out for y'all

Giganotosaurus and argentinosaurus did not occupy the same time frame - at least not for the most part.

Mapusaurus, a carcharodontosaur who probably evolved from the lines of Giganotosaurus - or at least pretty closely - was most likely the predator of this immense sauropod. As an obvious point, they did not do it by themselves, but in murderous gangs. Even then, the likelyhood of killing a fully grown adult are close to none.

Has anyone else heard the theory that they would use Argentinosaurus as a sort of walking buffet? taking large hunks of meat from the sauropod, and then calling off the attack. Sooner or later, the Argentinosaurus would succumb to its injuries, and they would move in to get at the prime cuts. It's an efficient feeding method, and would bring the chance of injury on the predators behalf down greatly.

Planet dinosaur did a small snippet on this:

Anyways, back on topic. If a Tyrannosaurus and Giganotosaurus fell into mutual conflict, I believe Giganotosaurus would come out on top 50-55% of the time. While not as heavily built as Tyrannosaurus, it could very well be more agile(undetermined) and more mobile. Being heavier isn't always a good thing in a fight to the death. Those slicing teeth would inflict majore wounds, causing alot of blood loss. Those claws as well, even though they weren't that much larger then those of Tyrannosaurus. If Rex gets its jaws around the neck or back, it's game over with one decisive bite.

CARNOSAUR - That's incredibly fascinating information you've presented! I'd no idea that Mapusaurus/Giganotosaurus simply fed upon their prey as it walked along. That's extremely interesting - and quite morbid! Thank you ever so much for your comments! :)

Actually after some research i found out that even though tyrannosaurus was smaller on Average tyrannosaurus relatively had the longest bipedal legs of any creature that ever lived! Giving it a relative height advantage and an equal top speed, so here are my final estimates and thoughts.

These are just my thoughts and i do hope you have liked them!!

I don't have any comparison to share, but I have fight results.

Well, Giganotosaurus was only a few feet longer than T.rex. They're built differently and designed for taking down different prey items.

Giga had serrated teeth designed like blades. This helped it to cut flesh with ease, which would come in handy since it hunted Argentinosaurus, one of if not the largest dinosaur of all time. It was lightly built for its size. This would make it more versatile, and would allow it to dodge a sauropod's attacks better.

T.rex hunted smaller prey, like hadrosaurs and ceratopsids. Its teeth were thick but still serrated. This allowed it to do much more than just penetrate flesh; it could crunch through bone. It is quite possible that the rex reached higher sizes, potentially reaching fifty feet long and ten tonnes in weight. It was heavily built, designed to be a fighter.

Basically, it's speed versus strength, with Giga being the speed and rex the strength. Rex could kill faster since it crushed bones, and having your prey bleed to death like Giga took longer, so I'd say that the rex would win.

Unless there are two or more Gigas, in which case it's f*cked.