Jurassic World officially begins filming today in Hawaii and the day has already begun with some potentially exciting news. Apparently, one of the original Jurassic Park jeeps have been spotted making its way to the Hawaii set for Jurassic World! The photo comes to us from our friend, Chris on Twitter, who tweeted not one, but two photos - one of the classic JP Jeep and one of another supposed, new vehicle for Jurassic World. Check them out below: 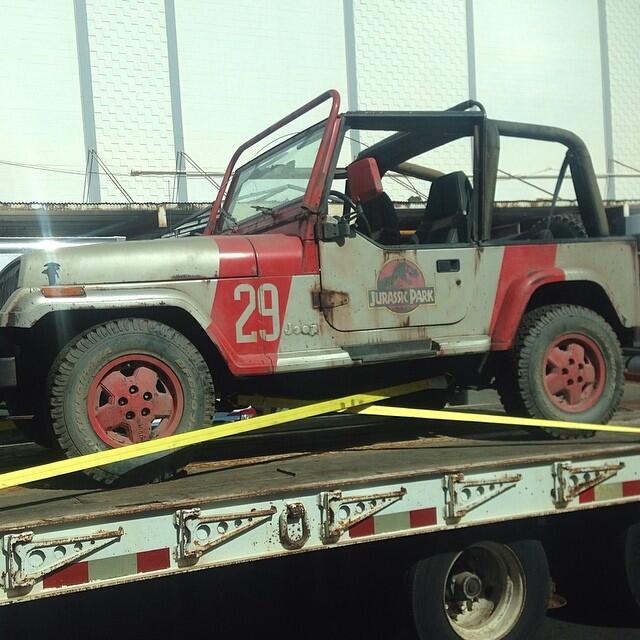 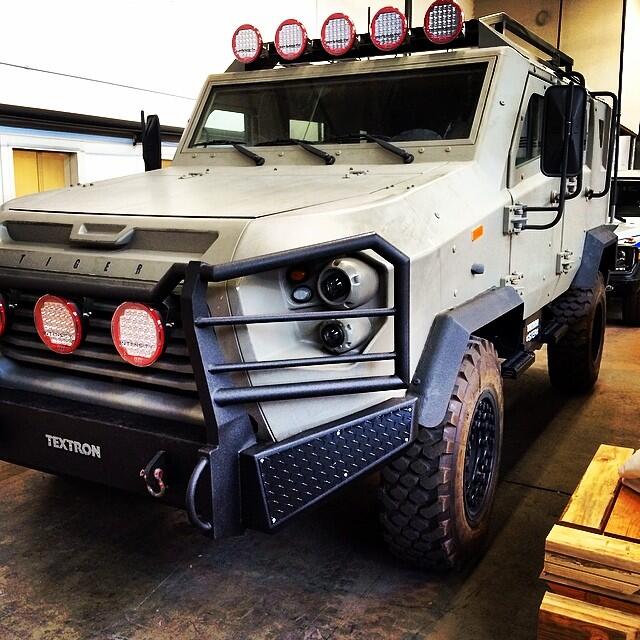 It's possible the original jeep from Jurassic Park could be used for a flashback scene in Jurassic World, considering its current state - looking old and weathered. Not to mention, it's still sporting the classic Jurassic Park logo on the side doors.

Regardless it is exciting to think we'll be seeing some familiar vehicles, even if we won't be seeing many familiar faces. Let us know what you think by commenting below!

The new one is most likely a bulked up safari Vehicle, (Which you'd expect from a dinosaur park)

The original jeep, Serial Number 29, was the one that originally tansported Hammond and Gennaro in the beggining of the movie, Past the Brachiasaurus...

I'd imagine after they finished with 29 (in film cannon) they probably took it to the garage... Hence the good condition of sitting there for twenty years... But, It has rust, Which shouldn't be there, so Someone tried to escape the island (presumed staff?) With 29...

If colin did his research, This could be interesting

This is great news!

I'm still waiting on the Ford Explorers to make a return.

It can’t be for a flash-back scene since the Jeep is slightly rusty here and there, showing age-damage, but still generally in good condition. If it were to feature in a flash back it would be in perfect condition (brand new). It is probably going to be for a scene where they show the Patel Corporation taking back Isla Nublar from the dinosaurs (probably where Chris Pratts' character and that Green screen chopper comes in). You know; a chopper lands in front of the visitor centre and a team secure the area. As they explore different parts of the visitor centre they find the gas jeeps in the garage. That makes more sense to me.

This new vehicle looks good, but it could do with a more interesting paint-job. I mean, it’s already beige – why don’t they give it some red stripes and numbering to match the old-school JP jeeps?

Also, about the logo; maybe this means that the Park is still called ‘Jurassic Park’ and the movie title simply refers to the big picture – dinosaurs dispersing to the Costa Rican mainland and other parts of the world. This would be absolutely fantastic by me. This way, they please everyone by retaining the nostalgia factor (not having to change the name of the actual park, the words on the Jeeps or the large gate), but you still mix things up a bit…

I Agree with "Phantom Raptor"

I have the theme music stuck in my head already!!!!! Phantom its time for change. I'm 26 now and Jurassic park franchise has been my all time favorite franchise ever since it being the first movie I ever saw in a theater as a kid.

I highly doubt a new company coming in, is going to directly copy the vehicles color patterns used 20 years prior. I would love to see a blue color scheme with the world logos somewhere, as well as a new number font.

This is not a reeboot so don't expect to see anything related to the first movie on any vehicles or anything else.

@Muldoomed- I was thinking the same thing.  Any business that is taking over a complete failure such as the first JP would not want to resemble that old business in any way.

I get the nostaglia kicking in and wanting it to be similar to your first JP experience, but its a completely new park.  I like what I have seen so far, I think they are taking the right steps of bringing in a completely new movie and story but still respecting the past.

I agree, it is indeed time for a change. Some change is good, but you can’t completely change everything and then say it’s NOT a reboot – which up until very recently was what it looked like was going to happen. We now know that is not the case.

What they seem to be doing now is great. Sure, they changed the name and the logo and the management, but they didn’t sever all links to the original trilogy. It’s still set on Isla Nublar, they’re bringing back at least one of the original cast members (Dr. Wu), and apparently we are going to see at least some of the familiar old vehicles.

I stand by my comments on the jeep.

I don’t expect the new management of the park to use the old vehicles that have been slowly rusting in the garage of the visitor centre for 22 years. And there’d be no real reason to ‘copy’ them either. That’s not what I was saying.

I agree with the logic that any business taking over a complete failure such as the first JP would not want to resemble that old business in any way... But there is just one problem with that; NO guest EVER saw what Jurassic park actually looked like (apart from Grant, Ellie, and Malcolm). When everything went down and the park was lost, InGen weren’t at the point of releasing any promotional material, (hell, they hadn’t even announced to the world what they had done) and very few people were in on it – only minimal staff were granted access to Isla Nublar. Clearly they wouldn’t, but if they did use the same vehicle designs and logos, it wouldn’t be the huge publicity problem that you make it out to be.

What I was actually saying is that the old vehicles are most likely going to be for a scene where they show the Patel Corporation taking back control of Isla Nublar (probably where Chris Pratts' character and that Green screen chopper come in). The chopper lands in front of the visitor centre, Chris Pratt and a team secure the area. As they explore different parts of the visitor centre they find the gas jeeps in the garage. I’m looking forward to seeing the ford explorers in the garage with the gas jeeps, showing the same signs of age but still basically brand new. I’m also looking forward to the clean-up crew coming across the flattened cyclone fence that the tyrannosaur tore down and looking over the edge to the smashed up (now rusty) upside-down ford explorer in the tyrannosaur paddock.

I don’t expect the Patel Corporation to fix and use these old vehicles, but it would not be a publicity problem if they did (for the reason I outlined above). I expect the old vehicles will only feature in a few scenes at the start of the movie, where they basically show us the condition Isla Nublar was in when the Patel Corporation first went in, and how they handled the clean-up. Then cut to present day Isla Nublar, with the park fully functioning and the new vehicles come in.

Speaking of new vehicles; I was simply saying that this one could use a bit of color. Army camouflage, traditional gas-jeep red with numbering, dark green (like the poachers’ vehicles in TLW) or whatever; the JW logo with numbering... Looking at it again, it would also be fine if they left it as is. It's a pretty cool looking vehicle.

Yeah no way would Patel corp use 1993/4 model vehicles (especially ground vehicles which is an ultimate faliure at a dino park, hence the raised track on the concept art of compound) in the year 2015. I think Patel Corp will not give tours on ground level... They seem smarter than that. Heck If I was patel corp I would make some awesome Gondola lifts. Its safe to say that being way above the dinos and having a view down on them would be much safer. Until the Gondola power goes out and your stuck hanging over the middle of the t-rex paddock : )